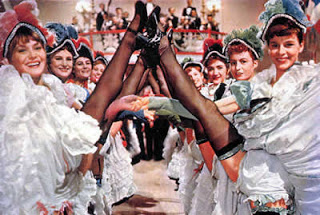 Kick Up Those Skirts & Show Those Knickers! Oui! Oui!

Sister Kate loves to dance The Can Can. Our first team CanCan choreography was danced back around the year 2010, in our Follies Du Monde show (our very first full length stage cabaret).

I’d like to present, for your viewing pleasure, the final scene from the film French Cancan (1955), by Jean Renoir!

A little history about the can-can, from the book The Natural History of the Chorus Girl by Derek & Julia Parker (available on ABEbooks.com):

The can-can, danced by a soloist or a chorus, was an even less artistic variant of the polka-piquee, in which the whole intention was to display the legs in a series of leaps and kicks and ‘splits’ – again, often without knickers: the can-can sans culottes was a dance which originally owed much more to the brothel ante-room than to the stage, and its intention was outright titillation, prostitutes being in attendance to satisfy the itches aroused in the customer. It was perhaps a dance more notorious than evident, though there is no doubt it was performed, and that stories of its aphrodisiac delights came back to convince potential tourists of the advantages of Paris.

This clip presents what may be a very historically accurate portrayal/recreation of the can-can at the Moulin Rouge. A lot of what we can gather from the visuals of how the dance may have looked, we can thankfully attribute to the artwork of such masters as Toulouse-Lautrec and Seurat.

From ladies flying down from ropes in the balcony, to girls bursting through paper in the walls, this film clip is FULL of extreme energy and excitement.

In between moments of exciting formations and ridiculous splits tricks, we are presented with images of utter energetic chaos of girls spinning, cartwheeling across the floors, screaming in excitement, legs kicking up in the air (as well as knickers!), and bodies generally flying all over the place.

One interesting thing to note, is it is believed that the CanCan, in general, was performed by individuals as opposed to a chorus of gals.

A few men became can-can stars in the 1840s to 1861 and an all-male group known as the Quadrille des Clodoches performed in London in 1870.[9] However, women performers were much more widely known.

The early can-can dancers were probably prostitutes, but by the 1890s, it was possible to earn a living as a full-time dancer and stars such as La Goulue and Jane Avril emerged, who were highly paid for their appearances at the Moulin Rouge and elsewhere.[10][11] The most prominent male can-can dancer of the time was Valentin le Désossé(Valentin the Boneless) a frequent partner of La Goulue. The professional dancers of the Second Empire and the fin de siècle developed the can-can moves that were later incorporated by the choreographer Pierre Sandrini in the spectacular “French Cancan”, which he devised at the Moulin Rouge in the 1920s and presented at his own Bal Tabarin from 1928. This was a combination of the individual style of the Parisian dance-halls and the chorus-line style of British and American music halls (see below).[12

There’s actually more to this clip than what you see below, but unfortunately any good lengthy version of this clip isn’t actually online at the moment.