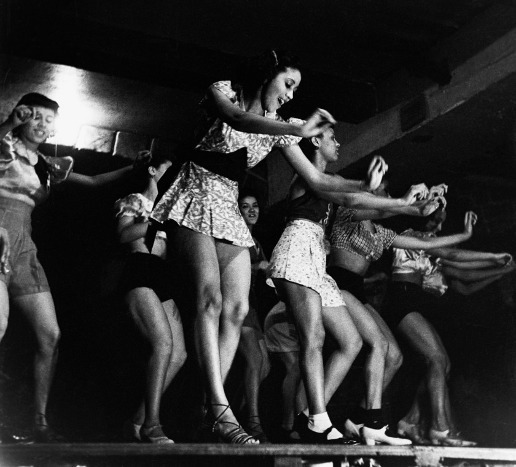 Learn how to choreograph from a master! Robin has choreographed over 100 routines and has brought them to life in a wide range of venues.

Yes, it’s true – picking a song is step #1 of How to Choreograph!

Before you finalize what song you choose, here are some things I consider:

Side story: To be honest, nothing irks me more than poorly edited choreography songs haha. This is because I think of a song (along with my choreography) as a story told to the audience. The musician that created the piece likely did as well. Even with modern day album recordings, I remind myself that the overall arching album is often ordered in a very specific way that is meant to be listened to, because it tells a STORY. So, IF you do need to splice your song in any way, try not to edit your song to cut off in a jarring or awkward way.

When in doubt, put a call out on social media for a friend who has some basic song editing skills – I’m sure they’d be happy to help you out!

Everyone will have their own way of doing this, but I’m going to share how I map my song.

First, I count the number of eights in each phrase, and note where the bridges in the song happen. Jazz is a crazy and wonderful artform, so sometimes, depending on the musician or recording, you may also end up with certain phrases that have more than 6 counts, or even 5 counts.

Making note of this (or “mapping out your song”) is helpful when you start planning your footwork and moves.

Also, this probably goes without saying, but double check your counts. Triple check them if it’s a complicated song. After the initial count through (pausing the song as I go), I re-listen to the song all the way through. I count out loud and use my map to follow along, ensuring I have the right number of counts.

Third, I make notations on what the overall SOUND is in each section. For example, I make little notes like “Trombone solo”, “Guitar solo”, “Chill section”, “Buildup to finale”, “ALL BAND”, etc. This will especially be helpful for when you get to step 5 below.

3. Listen to Your Song(s) on Repeat

“If you don’t know something thoroughly, you can’t do anything with it.”

To truly get a feel for the structure, listen to it at least 20 times on repeat.

Ideally you’ve listened to your song a LOT MORE than this already. I’ll put it on repeat while I work during the day even, or while I’m cooking, driving, etc.

And this may sound repetitive and you may think, “but won’t I get sick of it?”.
Well, I’d ask you in turn: “If you get sick of it in the prep phase, do you think you’ll be able to choreograph to the song over the next few/days/weeks?”

To really KNOW your song, is to know every little cymbal hit…. When the trumpet player comes in at the climactic point in the song…. All the breaks…. When it gets loud and when it gets quiet….. And the rhythmic moments in between.

4. Make Note of How Sections Feel and What Could Happen in the Choreography

This can be just general ideas of formations and/or energy levels you are feeling from the music in different parts.

For example, as I’m listening to the song, if there’s a chill moment in the music, I might make a note like “chill/small movements”. Or if the song has a moment where the piano keys are really tickling, I’ll make a note of that for later. I may want to add in shimmies there or something fun with the feet.

I’ll make similar notes if I can clearly picture certain formations during the song: I may write “circle section” if it feels right in my head, or if it’s a bridge, I’ll write “formation transition here”.

These general notes will help develop the overall “dance story” of your choreography, both in your mind and in your body.

5. Start to Jot Down Your Ideas.

And maybe use a short hand that works for you.

Here’s where I really start to put the pencil to the paper and jot down steps. I’ve developed my own “written choreography system” that works for me. I use a shorthand in my notes to keep things concise and quick to read. RF is the Right Foot and LF is the Left Foot. RS can mean Right Shoulder or Right Side, depending upon the context (ex: “spin over RS). I’d encourage you to come up with your own tools that help you.

And don’t forget to make clear written notes on those transitions! I talk about this a bit more in step 7…

6. Consider how props and costumes might enhance or detract from the choreography.

This is actually a very important step and there are lots of things to consider:

Finally, ask yourself: Will this prop ADD to the overall piece, or is it unneeded?

Personally, I would argue that if a prop helps to add a set, scene, or ambiance to a number, that’s a big plus! But, it’s equally important to ask “is the prop worth it” to the number? Maybe it’s not worth it to bring a large prop on stage you only interact with it for a few seconds. (Unless you’re jumping out of a cake! Haha!) I have seen performers make this mistake, however – bringing out a large and clunky prop on the stage that distracts the whole number, only to interact with it for mere moments, making it feel (in reflection afterwards) like it was more of a “distraction” than it was a “benefit”.

7. Make sure your transitions work!

This is one of the biggest things I see with newer choreographers: they string the moves together, but don’t consider how the footwork flows from one step to the next. They end up fumbling over their own footwork choices.

Make sure your transitions are clean and make sense based on where your weight ends up at the end of each move. If you have a step that has a tricky transition into the next one, just make sure you practice it a ton and make clear notes on how and why that transition will work ultimately.

For example: if you have a move that ends with your weight on your Right Foot on 8, but you need to kick with your Right Foot immediately on the next count on 1 – I would call that a tricky transition. Doesn’t mean it’s not doable, but I would just make sure that I fully understand where my weight is going at every moment (and ask myself why I want that transition to happen that way).

Dance your routine again and again, even if you’re just doing it in chunks. If it is a partner routine, you should still be able to dance it solo, going through the motions.

Remember, if YOU can’t dance it smoothly, then don’t expect others will be able to easily pick it up easily. Nailing transitions are a HUGE part of learning how to choreograph and ideally, should feel natural.

8. Workshop it with a friend and/or record yourself dancing the choreography.

Demoing your routine to a peer is a great way to get a feel for the visual and stylistic appeal. If you don’t have artistic peers you feel comfortable sharing with, definitely record yourself (in fact, I recommend recording yourself either way). We record ourselves ALL THE TIME on Sister Kate. Watching ourselves dance and perform for the camera is a huge integral way that we grow as dancers.

If you’re not used to filming yourself dancing, you may feel awkward or nervous about it at first. I promise you nothing will help expand your dancing more as a performer than watching and visually processing your own movement on video. Sometimes our own written notes just don’t do the physical movement justice when it comes to memory. Video is a great reference if you come back to the choreography later and don’t remember what you had planned.

9. Don’t be afraid to make changes or edits!

Finally, don’t be afraid to make changes! I truly believe that choreography should be fluid and something that is OKAY to change – even YEARS later. I still revisit choreographies I created 10+ years ago.

Something like this! This Coffee routine was featured in our full cabaret, Sister Kate’s guide to Seattle. This coffee routine is a great example of splicing two songs together to create a larger story.

And this choreography to Every Tub was originally co-choregraphed with Casey Koroshec back in 2009, and earned Sister Kate first place at Camp Hollywood in 2019. (You can read all about that experience!)