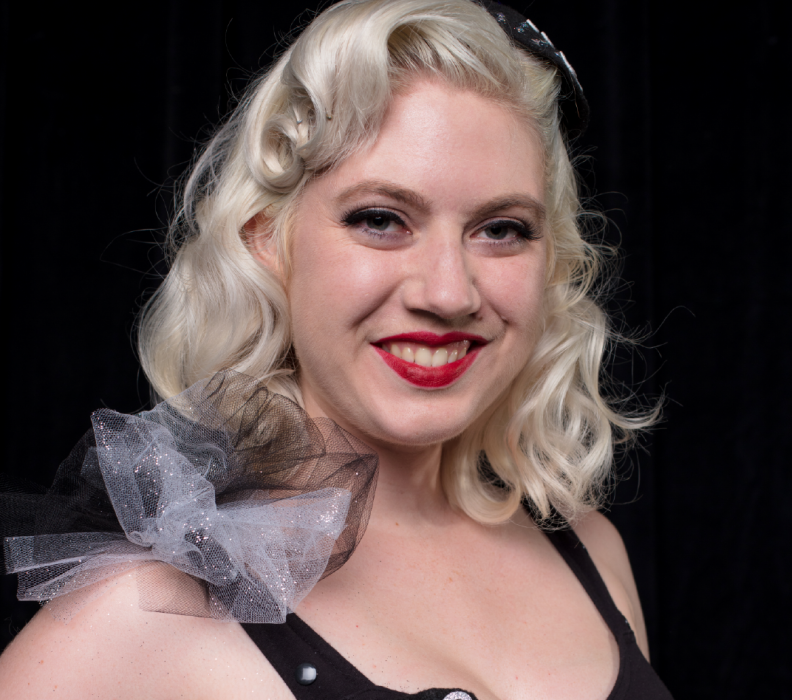 Eight with a Katemate: Taylor Stender

Welcome to “Eight with a Katemate“, our new blog format where we interview team members with 8 questions and share their stories with YOU, our readers!

Today, we are excited to be featuring SKDC member, Taylor Stender! Taylor’s created some incredible art while being on our dance company – read on below to learn more about her!

1. How long have you been on Sister Kate Dance Company?

Since 2016, right? I have a hard time keeping track because it simultaneously feels like forever, but also yesterday.

2. Why did you want to be a chorus girl?

I wanted to be surrounded by kick ass ladies who did jazz in an unapologetically feminine way. When I started to learn swing dancing, and subsequently was introduced to vernacular jazz, most of the examples of Really Good Dancing that I was exposed to were from a more masculine angle. When I moved to Seattle I saw Sister Kate during the Jump Session show at Benaroya Hall (in 2010?) and was blown away. This was a style I felt fit me and my identity.

I wanted to learn routines that I’d watched so many times over the years like “All I Do” from Singing In the Rain. To push the limits on the types of choreography that I could do (I come from a modern dance and color guard background). I love finding the challenges in each new routine and the sense of accomplishment of finally nailing it.

Let’s be real though, I have a dramatic streak that likes performing, being on stage, and having a new excuse to cover things in glitter and rhinestones. I am both a ham and cheese.

3. What classic movies / dancers inspire you the most in your dancing?

Always and forever Ginger Rogers. She could go from high energy and punchy Charleston and tap to graceful and elegant partnered dancing. I love the lines that she created and how her sense of performance could make you believe she was being spontaneous while still hitting all her marks.  Singing In the Rain is a favorite of mine. It introduced me to the “Big Musical Number” concept that I’ve come to love and associate with being a chorus girl. Plus watching Cyd Charisse was a life changer (yes please giant fans blowing yards long fabric). I also remember going down that Youtube rabbit hole of dance clips one night and watching Dorothy Dandridge dancing with the Nicholas Brothers. I forgot to watch the brothers because I was mesmerized by her.

Recently, I’ve really enjoyed watching all the big numbers from musicals of the 30-50s (oh man, the carousel number in Zeigfield Follies with Lucille Ball, or We’re in the Money featuring Ginger Rogers) and looking for the chorus girl who’s personality shines out even in a uniform line of dancers. I think that inner sparkle is what inspires me the most.

4. You’ve created some great group choreographies over the last few years on Sister Kate. Do you get inspired by a concept first, or a song?

Oof, that’s almost a chicken or egg question. I think all of my choreographies have been born out of wanting to have fun with the music or song, but occasionally there’s a lightning flash of concept and song at the same time.

The Mermaids routine came from me listening to one of my jazz playlists right after the brain storming session we had for our Circus show. So that one was a bit more concept and song at the same time. I love the Busby Berkley water ballet numbers, and the saccharin sweetness of “Beyond the Sea” fit that feeling. But for the mermaids it felt too pure, so naturally I needed to find a way to kill off the sailor in that routine.

The Sassysquatch routine was inspired by Casey MacGill’s “Hatchet Man” song, but morphed into an PNW Outdoors suite when I found Fats Domino’s “I’m Walking”  from one of those suggestion algorithms. The two songs just played so well together, and because all good things come in threes it put me on the search for a third song to complete a story arc.

5. How do you come up with the stories you tell in your choreographies? Where do the ideas stem from?

I often dream of little music videos in my head when I’m listening to tunes. I spend a lot of time driving (yay Seattle traffic), so that’s where a lot of story ideas start.

My first choreography for Sister Kate, the Summer Routine to “Blue Horizon” by Sidney Bechet, was dreamt up based on how the song felt to me. It sounded like sitting on my porch in Texas trying to get the humid air to move around me to cool off. The feeling of once you starting fanning yourself you can’t stop, and you’ll do almost anything to stay cool. Then inevitably my brain started to up the ante with a whole lot of “what ifs”. That routine was originally conceptualized as a burlesque routine with a flash dance style water dump at the highest and longest clarinet note during the crescendo of the song. But that’s a little ambitious to achieve as a chorus girl act… Who knows, maybe it will still get life as a burlesque routine later…

What’s the most challenging part of choreographing for a group on stage?

Formations and A/B choreography. I can’t count the amount of times I’ve grabbed salt and pepper shakers, or glasses, or bottles, to represent the dancers and moved those around to get an idea of how the formations would morph. It’s a pretty silly thing to watch, but it get’s the point across. I also get a little fixated on certain riffs in the music, so when I do A/B or Call/Response choreography I can easily come up with the call but often struggle with the response. Both of these things have gotten easier the more I’ve done it, but they are still the thing I have to focus on the most.

7. And you’re part of a secondary troupe that focuses on Burlesque, correct? Tell us about that.

My long time friend, Chastity Svelte, coerced me into talking on stage. She’s known me and my terrible puns for a long time, and has been my biggest cheerleader for getting into the burlesque scene. She saw an opening for a female voice as a host and brought me on board. Now I’m the “Fabulous Femcee: Grace, Darling” for the burlesque troupe The Trinkettes!

However, it’s not just fun and rhinestones. I am also one of the core producers and the artistic director for the troupe. My responsibilities include leading our meetings, lining up marketing, creating the concepts and most of the choreography for our group numbers, and creating whatever weird storyline we use to link our show together.   Currently we are on our second full season of shows and will do between 4-5 shows from Feb-Nov each year. It’s a lot of work but the pay off is usually unbeatable. It’s super fun to flex my public speaking chops with the troupe, and get a little raunchier than Sister Kate usually goes.

Being a part of The Trinkettes has also pushed me in a new ways. I’ve found more comfort with my body and my voice in this endeavor than I have within other artistic ventures. I remember the first group choreography I created for the Trinkettes: it was wayyy more solo jazz based (more similar to SK style choreo). In contrast: the last group number I worked on had us all stripping out of dresses and into pasties and panties, and I mimicked some self pleasure while introducing an act on stage at our last show. It’s delightfully liberating to explore this other side to me in the inclusive and supportive community of burlesque. The SeaBQ community holds a lot of the same qualities that attracted me to join Sister Kate!

8. Is there anything you haven’t tackled yet on Sister Kate that you look forward to dipping your toes into in the future?

Being on the production side of the Trinkettes has given me a bit of a taste for that side of shows. I’d love to get into that for our full length shows. My favorite part of any show is the creation of the story lines and side hi-jinx. Other than that, I always want to perform for new and different audiences to share the chorus girl love!