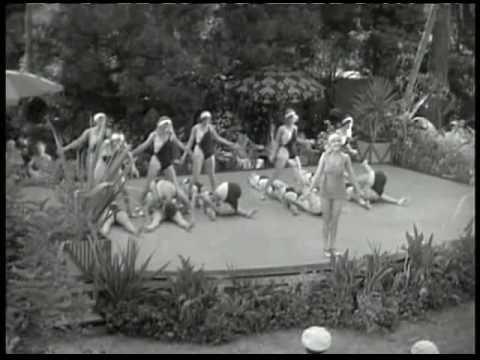 Come in the Water, The Water is Fine!

Come in the Water, The Water is Fine!

Summer is here in Seattle! We’re gearing up for our annual Sister Kate Dance Company team-building summertime fun. In that mindset, for today’s blog, I would like to share with you quite a fun little warm weather clip titled “Come in the Water, the Water is Fine”, from the film, Tanned Legs (1929)

This is a scene with a “beach beauties” theme, even though certainly, some of the chorus girl moves are pretty silly & quite comical. This clip features singer/actress June Clyde.

Here’s a little info on June from Wikipedia:

Clyde’s career began at age seven on the vaudeville stage, billed as Baby Tetrazini. She progressed to a modest career in Hollywood films before marrying English film director Thornton Freeland. Clyde moved to England with her husband and appeared in several British films and stage productions starting in 1934, as well as returning to the United States periodically for both stage and film work.

According to IMDB.com, between 1929

and 1957, June was in 63 movies and tv episodes! She even had a few Broadway theater credits to her name. That’s quite an impressive (nearly) 30-year career, even though there is not much information to be found about her online.

Here is a quick little bio about June, written by Hal Erickson, of All Movie Guide (NY Times):

June Clyde was a vaudeville star at age seven, billed under her family name as “Baby Tetrazini.” After a thriving stage career, Clyde made her talking-picture debut in RKO’s Tanned Legs (1929).

While she had a pleasing personality and above-average dancing and singing skills, she was seldom seen to best

advantage in her Hollywood films, playing second (or even third) fiddle to such bombastic performers as Wheeler and Woolsey (The Cuckoos 1930) and Jimmy Durante (Hollywood Party 1934).

Upon her marriage to British director Thornton Freeland, Clyde relocated to England, where she showed up in such films as the 1935 Richard Tauber vehicle Forbidden Music and in many West End stage productions.

She periodically returned to Hollywood in the 1940s, where once again she was consigned to secondary roles. Back in England in the late 1940s, June Clyde remained there until her death at age 77; her last film was the British-produced, Hollywood-financed The Story of Esther Costello (1957).

Other Performers in this Clip

I could find no information on the chorus girls featured in the clip, except for just a few names:

About the Chorus Girl Dancing

This scene is full of funny and strange movements. The most comical parts of this routine for me are at around one minute into the clip. The chorus girls link arms and swing their right legs over the handholds, but

then immediately let go and begin hopping backwards as the back girl crawls between their legs to the front of the line. Umm… what’s the point of all that? Perhaps just to show a cool transition, which transitions into no other move? After this transition, they slowly hop backwards in an open leg stance, while the back gal then crawls through the legs and pops out in front. The choreography definitely reminds one of a strange 1920s fitness boot camp.

Another funny spot is directly afterwards, at around 1:18. The girls proceed to do somersaults down their line, landing like a snow angel, one after the other. I can only imagine when the girls were first shown the choreography for this film. They must have thought the choreographer was crazy and playing a joke on them. To make this effect work, the next gal REALLY has to place her forehead VERY close to the crotch region of the gal on the ground. Talk about being needing to be comfortable with your fellow dancers haha.

This routine is certainly energetic – lots and lots of hopping for the lovely dancin’ ladies, and June is just so damn adorable in her little late 20’s swimsuit and headband! The costumes of the dancers in a black and white geometric pattern rings true art deco era. The visual effects are hypnotizing and with the catchy tune of June’s cute and classic voice, it’s pretty hard not to smile when you view this clip.

So now, for your viewing pleasure, I’d like to present, “Come in the Water, the Water is Fine”, from the 1929 film, Tanned Legs.