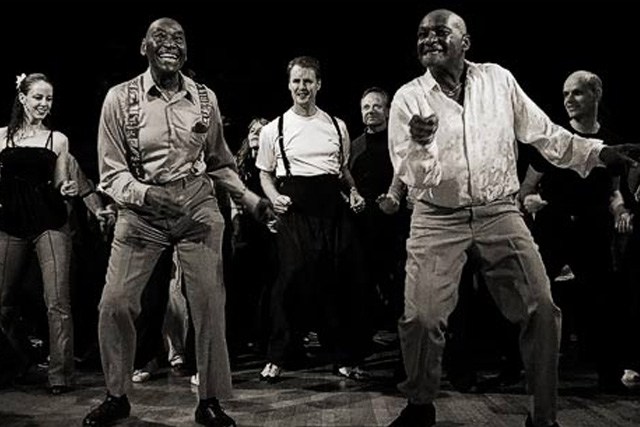 These are the classic solo routines every vintage jazz dancer should know.

If you’ve been to a few lindy hop dances, you might know this one as simply “The Shim Sham”. Originally a tap routine called “Goofus” by Willie Bryant and Leonard Reed, it was adopted by the original swing dancers at the Savoy Ballroom and eventually made its way into the contemporary lindy hop scene via Mr. Frankie Manning. The man himself and long time teaching partner Erin Stevens demo the number in this video from 1995.

This is my personal favorite of the swing line dances – it’s a little bit funky, but not too challenging, with lots of room for each dancer to put their own spin on the moves. Choreographed by Frankie Manning to “Tuxedo Junction” and made famous in “The Spirit Moves” documentary of the 1950s, these days it’s often danced to “The Dipsy Doodle” or Fats Waller’s “Chant of the Groove” in addition to the original song.

As the legend goes, the manager of Whitey’s Lindy Hoppers called leader and choreographer Frankie Manning after seeing a dance craze called The Big Apple and Frankie choreographed the number based on that description. The version most lindy hoppers know is from a clip from the 1939 movie “Keep Punching”. You can see it in all its colorized glory here.

Dean Collins is another of the original swing-era greats, who is often credited with introducing the Lindy Hop to Los Angeles after he moved there from NYC in the late 1930s. He went on to choreograph for and dance in over 40 movies, often with dance partner Jewel McGowan. In addition to his unique smooth style of Lindy Hop, he’s also known for his stylish version of the Shim Sham, seen here with Bart Bartolo in the early 1980s.

It’s the name of both a jazz step and this routine (which includes that step) by Dancer and Choreographer Norma Miller, who is said to have created it as an audition piece for her various performance troupes in the mid-20th century. When you start learning this number, you can see right away why it’s a good test of a dancer’s skill. With lots of tricky timing and the fact that you have to do all the moves on both sides, this classic solo jazz routines will certainly keep you on your toes.

In the early 2010s, a lesser known classic number enjoyed a revival. Choreographed by Lee Moates, George Sullivan, and Delma Nicholson of the Mama Lu Parks dancers in the 1960s, Mama’s Stew is a spicy routine that will definitely get your heart going, so get out there and stir it up!

You may also enjoy our Chorus Girl Reading List!