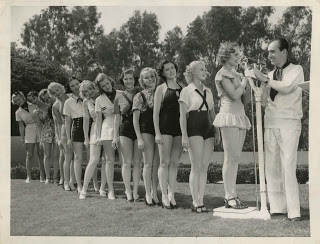 Life as a Chorus Girl in the Early 20th Century

What it meant to be a chorus girl

Life as a chorus girl in the early 1900s-1940s (and certainly before that) was difficult work and long hours. Often times girls practiced until their feet bled. Eventually, with the popularity of the chorus line, women were limited for jobs based on their waist measurement, height, and weight.

And with the demand for large production numbers, those women saw a decreasing pay rate.

I ran across a fantastic article online about the history of chorus girls in London. I’ll highlight a few specific interesting facts here.

Wishes of a Wealthy Marriage

“Dancers getting their talents measured for a spot in the Theatre Revue on Broadway, 1937″

Costuming on the Job

Even to this day, some of these facts still hold true. To audition for The Rockettes, you must be between 5’6″ and 5’10.5″ tall. Guess that counts a number of our team out!

I recently was able to go on a tour of Radio City Music Hall in NYC and was able to meet a real Rockette. One fun fact that they informed us of, was that during the 1950s and 1960s, some women were able to “fake” their height with the popular taller hairstyles of the time. These hairstyles allowed them to “get away” with the illusion that they were actually taller on stage than they really were.