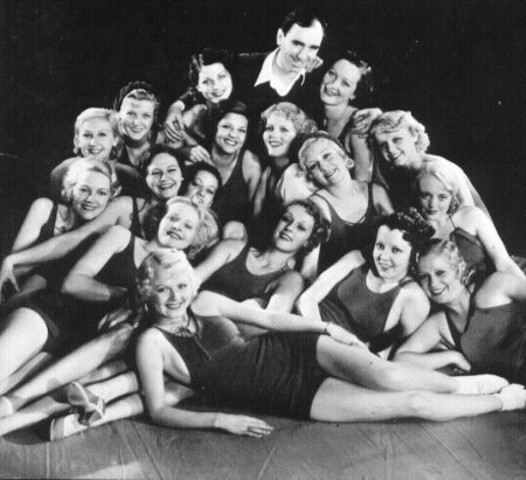 Mae Clarke was born Violet Mary Klotz in Philadelphia, Pennsylvania. She started her career as a dancer and subsequently starred in many films for Universal Studios, including the original screen version of The Front Page (1931) and the first sound version of Frankenstein (1931) with Boris Karloff. Clarke played the role of Dr. Frankenstein’s fiancee in Frankenstein, who was attacked by the Monster (Karloff) on her wedding day.

She may be best known for her leading role as, “Myra Deauville,” in the 1931 pre-Code version of, Waterloo Bridge. In the film, she portrays a young American woman who is forced by circumstance into a life of prostitution in World War I London. Both the film and Clarke’s performance were well received by the critics.

She also appeared in the modest pre-code Universal film Night World (1932), with Lew Ayres, Boris Karloff, and Hedda Hopper. By the mid-1930s though, Clarke was no longer a leading lady and was only featured in small or bit parts through the 1960s.

Inspiration from this Chorus Girl Clip

Today’s Chorus Girl Clip is an early Busby Berkeley number from 1932. This was before he joined Warner Bros. and later created such classics as “Footlight Parade” and “42nd Street”.

One of the things I admire about this piece so much are the simple but very art deco style leotards w/ the silver appliqué touches. This simplistic costume design was definitely a direct inspiration for the costuming behind Sister Kate’s routine, The Black Bottom.

The formation transitions are great and these girls truly shine! For such an early Berkeley number, this routine is fairly simple in it’s own right, compared to later pieces by Berkeley featuring dozens more ladies on stage, elaborate waterfall sets, giant & elaborate costumes, etc. Yet for me, this routine is a star for its simplicity and precision and I love it for all that it is.

This chorus girl clip has strongly influenced me for years. I’ve taken bits of inspiration from it for other routines I’ve choreographed for Chorus Girl teams I’ve managed. While in Calgary, managing The Sugar Sweets, I choreographed a variation of the Shim Sham to this song in the clip. The turning line section of choreography in this clip, I used directly in my 2009 SKDC choreography,  “We’re In The Money“. Sister Kate even tried to loosely re-create the group photo (with Mr. Busby Berkeley, himself) in one of our own photoshoots in 2015.

Don’t miss the very unique ending exit off stage by the girls! Enjoy!