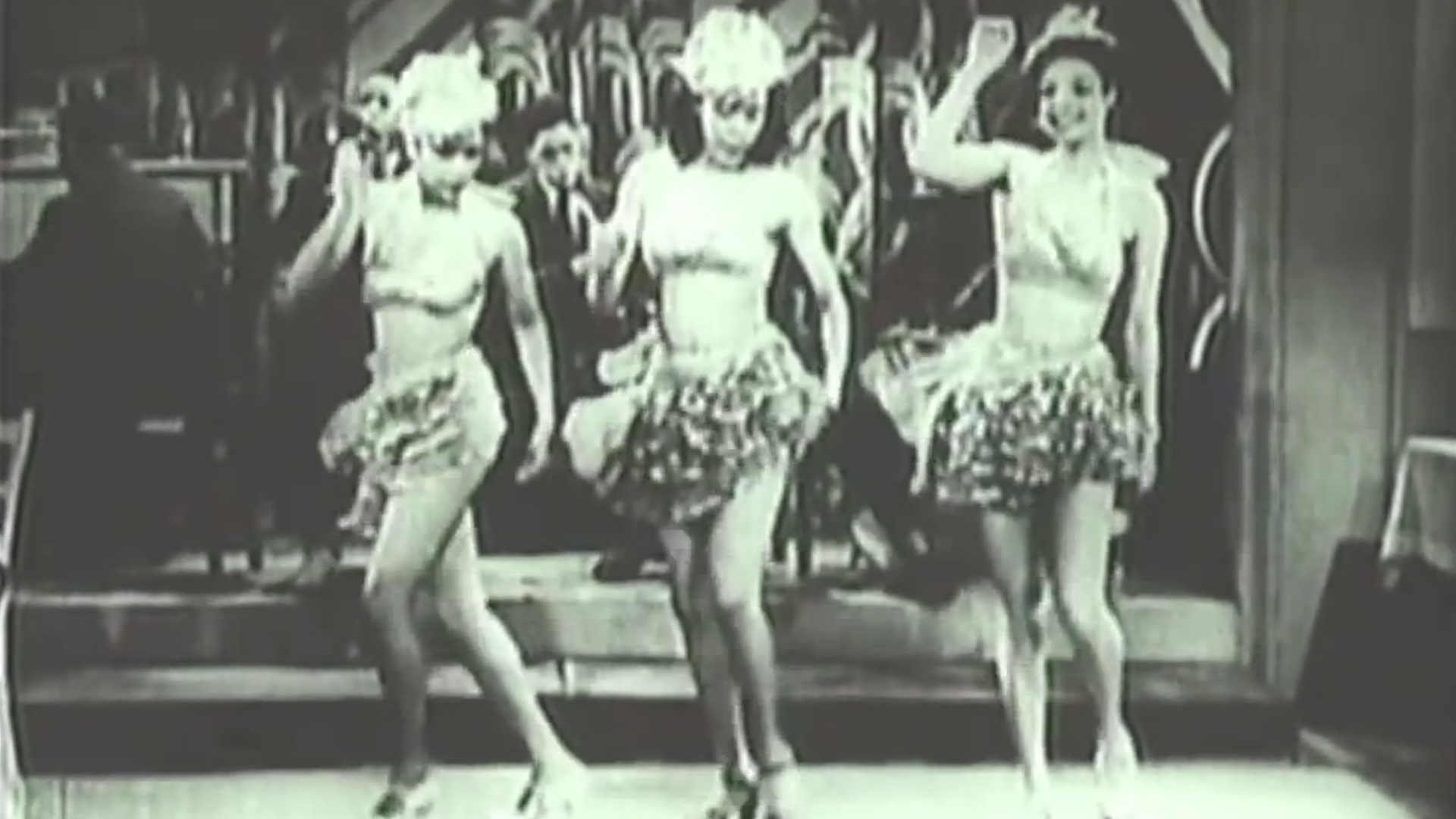 Special thanks to Jacqueline Tabor for the editing feedback

It’s Black History Month! We’d like to take this opportunity to share some of our absolute favorite historic clips of black female dancers. These clips are inspirational and some have even served as reference points to us for choreography ideas over the years. Although sometimes we can’t find the best information behind these incredible dancers, we hope that by sharing them with our readers, it will continue on their legacy, even if their lives are (unfortunately) still a mystery.

Please note that for the purpose of this blog, we are only focusing on a few amazing dancers for whom we have clips to show you. There definitely are so many more we could share and discuss, so this might just be “part 1” of a larger series. This is by no means meant to be a definitive complete list alone.

Dudley was a well known tap and snake hips dancer of the time. She was a close friend of Duke Ellington, and accompanied him on a number of tours. At the age of 13, she ran away from home to join the traveling Chocolate Box Revue. At 15 she married vaudeville performer S.H. Dudley (who ran his own revue) and took his last name.

By the age of 18, Dudley was opening for Earl “Snake Hips” Tucker. One famous story is that Tucker once wasn’t at the club on time, so Dudley hopped on stage and performed his routine in his absence, to a tee.

Her most famous clips are from Symphony in Black (1935) and Bundle of Blues (1933), where she danced alongside Florence Hill (see below).

In later life she was known as a very well respected member in the Harlem community. Bessie Dudley died January 16, 1999 at the age of 88.

Unfortunately, not much is known about Florence Hill. In my research into clips on YouTube, I found in the comments section some notes from Hill’s great niece, who had never seen her dance before. The niece noted that at the time of the famous Dudley/Hill clip her great aunt was 22 years old.

“She (Florence Hill) was the life of the party. We had plenty growing up especially around the holidays. And man could she cook. I used to stare at her when I was about 8 or 9 years old because I thought she was so pretty. My father’s 2nd youngest sister was named after her (we called her baby Florence) who looked exactly like her. I didn’t know she could dance like this. Now I get a chance to see it over and over again.”

I did find a reference stating that Hill was also in the film “Gone Harlem” (1938), although I couldn’t find it online. Tragically, it is listed online as a “lost” film.

Below are Bessie Dudley and Florence Hill in Bundle of Blues (1933).

The Sepia Steppers were an all female tap group who starred in a number of soundies in the 1940s. Based in NYC, their most famous soundies were Stepping Along, Toot That Trumpet, Poppin’ the Cork, Sweet Kisses, and Chatter – all from 1943.

Within the last ten years, we’ve come to know one of The Sepia Steppers much more: Alice Barker, who we will discuss below.

Try as I could, I could not (with 100% certainty) find the full list of other members of The Sepia Steppers easily anywhere in one place.

Do you know who were they were? Comment below if you do! We want to know!

Nikki O’Daniel is actually also in the below Mabel Lee soundie, Chicken Shack Shuffle. O’Daniel was a Sepia Stepper, and I’m fairly convinced she is front and center for Toot that Trumpet.

O’Daniel is perhaps best known as the woman who sat on the piano while Louis Jordan sang for her in his famous song Caldonia.

O’Daniel also starred as a dancer in Billy Eckstine’s soundie Our Delight (dancing with Al Guster).

Perhaps you remember a few years ago a viral video going around: 102 y/o Dancer Sees Herself on Film for the First Time. The viral clip (posted below) shows a couple of historical film researchers visiting Barker in a NYC nursing home, showing her footage of herself dancing in soundies. The video has over 18 million views on social media.

Barker was a chorus line dancer in New York City in the 1930s and 1940s, performing at clubs such as The Apollo and The Cotton Club. She also performed regularly at the Cafe Zanzibar in NYC, with shows frequently led by Cab Calloway. At Cafe Zanzibar, Barker was part of the chorus line, The Zanzibeauts.

One of the most amazing and wonderful facts we were able to find in researching Alice, was that in the 1960s, she made an appearance dancing on The Frank Sinatra Show. Further digging shows that the Frank Sinatra Show ended in 1960, so it’s possible this was actually in the late 1950s instead. Apparently Barker was one of the first African American dancers to appear on national prime time television. Digging around did not turn up the clip online, unfortunately.

She spent the last day of her life in good spirits, listening to music and enjoying having her fan mail read to her by Gail. As she often did, Alice commented again how amazed and thankful she was that people remembered her and took the time to write, “I really feel that these people care about me.” Her fans the world over truly gave joy and meaning to the last years of her life. She was always humbled and honored that she could be an inspiration to others.

One of the most influential dancers for me recently has been Daisy Richardson and this particular clip. Unfortunately, after much Googling and digging, I can’t seem to find ANYTHING about Richardson!

The following clip was filmed in 1946 (or 1947) with the Dizzy Gillespie Orchestra. Why feature a clip with a dancer that has zero history on the individual? Watch the clip and you’ll find out.

I was able to find a potential relative online and sent them a message – it’s a long shot, but I’ll let you know if it’s a match!

Do you happen to have any information on Daisy Richardson? Post below in the comments if you do! Tell us what you know and we’ll update this blog.

At the age of 16 and started her career as a chorus girl at the Alabam Club. Her career took off in 1921 when she became a chorus dancer of the famous Broadway musical Shuffle Along, where she met Josephine Baker.

Following Shuffle Along, Josephine Baker hired Washington to be part of her cabaret group, “Happy Honeysuckles“. The two women became lifelong friends. Washington also had close connections to Duke Ellington, and as a dancer in film is perhaps best known for the below clip from Black And Tan by Ellington (1929).

Washington would go on to star in a number of film and radio roles. In later life she wrote for theater, was an entertainment editor for Peoples’ Voice (an African American newspaper) and worked closely with the NAACP fighting racism in America. Alongside Noble Sissle, WC Handy, and Dick Campbell, Washington would become a founding member of the Negro Actors Guild of America in New York.

In Hollywood, she was regularly urged to “pass” for fully white by studio heads who made her promises of making her the biggest star of the era. Washington always refused these requests. When questioned why, she has been noted as replying:

Because I’m honest and because you don’t have to be white to be good. If they want me, they will call me, and if they accept me, they’ll have to take me as I am.

Sandra Gibson was born Mildred Pollard. Gibson was a shake blues dancer, lindy hopper, and a standup comedian. A member of the Whitey’s Lindy Hoppers, among dancers she went by the nickname “Boogie”.

She joined Whitey’s Lindy Hoppers at the age of 18, and famously partnered with the incredible Al Minns, even going on to win the Harvest Moon Ball in the late 1930s. Gibson knew Minns as a child at the same church, where they formed a singing quartet with other friends.

The below clip was filmed as part of the documentary series on dancing, “The Spirit Moves”.

In Lindy Hop, Gibson had fears over having her feet off the ground. As a result, she instead chose to use her strength to her advantage, becoming the first female to pick up and flip her partner.

Gibson and Minns once performed a six month gig at The Cotton Club alongside performers such as: Cab Calloway, Sister Rosetta Tharpe, The Nicholas Brothers, The Dandridge Sisters, The Berry Brothers, and more.

In 1939, she appeared with Minns dancing on Broadway in The Hot Mikado, starring Bill Robinson.

Mabel Lee was born in Atlanta, Georgia. A performer since the age of 4, Lee was a famous tap dancer, singer, and entertainer. At the age of 19 she moved to New York City where she launched her career as a chorus dancer; Lee was chosen out of 300 girls to dance in the chorus at Harlem’s West End Theatre. She performed at many famous venues throughout her career, including The Apollo Theater in Harlem, and the Palladium in London.

During the war, she toured with the USO as a member of their first all-black unit. Eventually, she would perform in the USO as her own show headliner, with two comedians and an all-woman chorus and band.

At the Apollo, Lee would sometimes dance up to 6 shows a day.

“I came here to be, what my teachers from kindergarten and up always said, to be a star; I’ve been in show business all my life.”

Lee was known as the “Queen of the Soundies”, appearing in over 100 shorts. Lee’s career continued to flourish throughout her life. In 1952 she starred in the revival of the all-black jazz musical Shuffle Along. In the 1960s and 1970s she continued to star in a number of theatrical shows.

According to the Library of Congress, in 1985 Lee “received a grant from the National Endowment for the Arts to make master dance videos on teaching vintage chorus line routines and other fundamentals of chorus line work.” She continued to tour and star as the featured teacher and performer into the 2000’s.

“I love doing what I’m doing, what God made me do. I love being a part of people, teaching and performing. I’m an expression of show business, not just dancing– open yourself up, give them love. I love being feminine, being a woman.”

As mentioned above, this is just a tiny sliver of the universe of incredible Black female jazz dancers in historical film. What we have is a gift. America has an unfortunate history of silencing, erasing, and forgetting Native American and Black (and other POC) artists. The more we watch, share, and ask questions, the more we’ll ALL dig deeper and try to find the answers on who these incredible women were. When researching this blog, I went down a very deep rabbit hole of information and discovery, lasting many hours. And what an incredible and educational adventure it was!

Follow our Facebook page for MORE clips than these on our wall as we continue to all celebrate Black History Month 2020 in February and beyond.