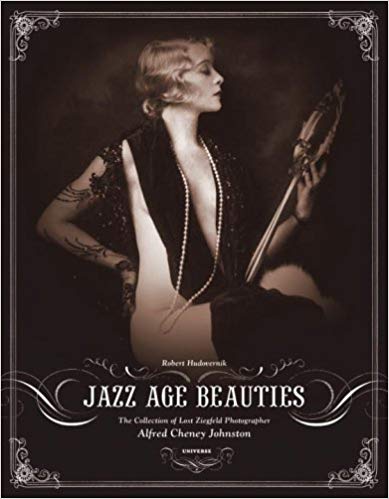 Looking for a new book to binge on? Here are our chorus girl reading recommendations to keep your spirit feeling jazzy even when you’re not on the dance floor.

The Natural History of the Chorus Girl (out of print)

This first book is actually out of print, but you can find used copies of it online occasionally.

“A fascinating pictorial exposé of “Les Girls” in the longest chorus-line ever assembled. Here they are, starting with the Victorian era and the beauties of the Moulin Rouge and London Coliseum, going on to the Follies Bergère, the girls of the New York Follies and Busby Berkeley’s Hollywood Musicals – all the way to their modern transformation as Playboy Bunnies and Music Hall Rockettes.

Dozens of photographs – many in full colour – enhance the marvelous text that draws us into their enchanted circle, making us realize what the great days of the chorus girl were all about. We see them revealed as never before: on-stage, off-stage, and back-stage, in glittering costumes by famous designers such as Erté and John Truscott; we see them tout nu, wearing nothing but splendid headdresses – we see them at their best and at their worst, posing in tableaux vivantes, kicking up their legs in undisciplined abandoned or in close formations. “

“In the first decades of the twentieth century, Broadway teemed with showgirls, but only the Ziegfeld Girl has survived in American popular culture—as a figure of legend, nostalgia, and camp. Featured in Florenz Ziegfeld Jr.’s renowned revues, which ran on Broadway from 1907 to 1931, the Ziegfeld Girl has appeared in her trademark feather headdresses, parading and posing, occasionally singing and dancing, in numerous musicals and musical films paying direct or indirect homage to the intrepid producer and his glorious Girl. Linda Mizejewski analyzes the Ziegfeld Girl as a cultural icon and argues that during a time when American national identity was in flux, Ziegfeld Girls were both products and representations of a white, upscale, heterosexual national ideal.

Mizejewski traces the Ziegfeld Girl’s connections to turn-of-the-century celebrity culture, black Broadway, the fashion industry, and the changing sexual and gender identities evident in mainstream entertainment during the Ziegfeld years. In addition, she emphasizes how crises of immigration and integration made the identity and whiteness of the American Girl an urgent issue on Broadway’s revue stages during that era. Although her focus is on the showgirl as a “type,” the analysis is intermingled with discussions of figures like Anna Held, Fanny Brice, and Bessie McCoy, the Yama Yama girl, as well as Ziegfeld himself. Finally, Mizejewski discusses the classic American films that have most vividly kept this showgirl alive in both popular and camp culture, including The Great Ziegfeld, Ziegfeld Girl, and the Busby Berkeley musicals that cloned Ziegfeld’s showgirls for decades.

Posing a Threat: Flappers, Chorus Girls, and Other Brazen Performers of the American 1920s

“New definitions of American femininity were formed in the pivotal 1920s, an era that vastly expanded the “market” for sexually explicit displays by women. Angela J. Latham shows how quarrels over and censorship of women’s performance ― particularly in the arenas of fashion and theater ― uniquely reveal the cultural idiosyncracies of the period and provide valuable clues to the developing iconicity of the female body in its more recent historical phases.“

“By the 1920s, women were on the verge of something huge. Jazz, racy fashions, eyebrowraising new attitudes about art and sex―all of this pointed to a sleek, modern world, one that could shake off the grimness of the Great War and stride into the future in one deft, stylized gesture. The women who defined this the Jazz Age―Josephine Baker, Tallulah Bankhead, Diana Cooper, Nancy Cunard, Zelda Fitzgerald, and Tamara de Lempicka―would presage the sexual revolution by nearly half a century and would shape the role of women for generations to come. “

“Despite Prohibition, the ’20s was the decade of jazz, flappers and hip flasks. While some took their vote and joined the Woman’s Christian Temperance Movement, others, well, took liberties. Compiled here for the first time are more than 200 publicity stills and photos of some of America’s first “It” girls—the silent film-era starlets who paved the way for the cacophony of Monroes and Madonnas to follow.

Accompanying these iconic images are the stories behind them, including accounts from surviving Ziegfeld Girls, as well as ads featuring them that helped perpetuate the allure of It girl glamour. When rare and striking portraits of these women surfaced on the internet in 1995, author Robert Hudovernik began researching their source. What he discovered was the work of one of the first “star makers” identified most with the Ziegfeld Follies, Alfred Cheney Johnston. Johnston, a member of New York’s famous Algonquin Round Table who photographed such celebrities as Mary Pickford, Fanny Brice, the Gish Sisters, and Louise Brooks, fell out of the spotlight with the demise of the revue. A sumptuous snapshot of an era, this book is also a look at the work of this “lost” photographer.“

“From the author of The Jewel of Medina, a moving and insightful novel based on the life of legendary performer and activist Josephine Baker, perfect for fans of The Paris Wife and Hidden Figures.

In this illuminating biographical novel, Sherry Jones brings to life Josephine’s early years in servitude and poverty in America, her rise to fame as a showgirl in her famous banana skirt, her activism against discrimination, and her many loves and losses. From 1920s Paris to 1960s Washington, to her final, triumphant performance, one of the most extraordinary lives of the twentieth century comes to stunning life on the page.

With intimate prose and comprehensive research, Sherry Jones brings this remarkable and compelling public figure into focus for the first time in a joyous celebration of a life lived in technicolor, a powerful woman who continues to inspire today.”