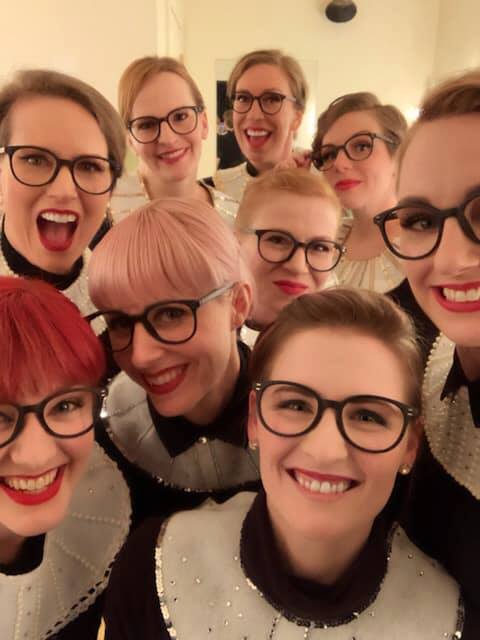 What a year it has been for the Sister Kate Dance Company! We’re so honored and lucky to be able to create the art we dance on the stage, and to share it with so many Seattle fans. Here are a few of our favorite accomplishments over 2019.

In January we finally took the plunge and moved our costume collection to a Public Storage unit in the city core. This doesn’t sound like a big deal to most, but the convenience of having secured storage and having it located so close to our rehearsal studio has proven to be a game changer for us!

With a team of over 20 dancers at any given time, and 13 years worth of costumes, you can imagine the collection we’ve gathered!

January also means the start of prepping for our spring show, and this year that meant Sister Kate’s Guide to Seattle! This show was going to be our 9th Sister Kate cabaret, and we knew it was going to be a wild ride. We can’t begin to explain the juggling act that is coordinating 18 routines amongst 20+ dancers, and the scheduling that goes into that process. It truly is a labor of love, but we (of course) wouldn’t do it if it wasn’t worth it, which it absolutely is!

Sister Kate’s Guide to Seattle provided a platform for a few new choreographers to join our mix: Andrea, Lizzy & Katie, and Jana.

Sister Kate got to open the show, and what better way than as 9 dancing Supreme Court Justices?

The month before the show opens always brings the last scramble and push for extra rehearsals and costuming sessions, and April 2019 was no exception. The props and costumes for Sister Kate’s Guide to Seattle were definitely on a next level!

May, of course, was the month of the big show! Four full months of preparation leading up to this small performance run of 9 shows. Sister Kate’s Guide to Seattle was by far one of our favorite cabarets we’ve put on stage. From dancing flames to flipping laptops and flying fish, we strutted our stuff in honor of our HOMETOWN! Oh yeah, there was a sassysquatch as well.

July calmed down for us a bit, at least for some of us. We enjoyed a team BBQ with friends and family in the park. We also had a little general promo photoshoot with Priya Alahan for more 1920s stock photos of us. This photo below, of team member Sheila, is particularly one of our favorites. It really gives a stunning Ziegfeld Follies vibe.

The team hopped on our next project (no rest for the weary) – prepping Every Tub for Camp Hollywood’s Solo Jazz Team Division! Every Tub is a routine that was choreographed all the way back in 2010. Sister Kate has never competed at Camp Hollywood in Los Angeles, but we knew that if we ever did, this is the routine we’d want to take. Even for those not dancing in the routine, their support and feedback was pivotal in the success during rehearsals.

Over the course of about two and a half months, eight of our chorus dancers worked their bums off through sweat and tears (and almost a little blood one time haha). In the end, it all paid off through a great representation of Sister Kate’s work ethic on stage, and we were honored to take First Place representing Seattle!

With the Camp Hollywood competition finished, we moved on to our final project of the year: a friends and family private party and mini show in December. One night only. The event, Short & Sweet, was a fun experiment and space for us to play with performing solos and duets only.

Normally on stage, our routines range from 3-5 dancers, so this was a fun opportunity to do something different. The concept for this mini-show was for every dancer to present either a routine recreation, or an original choreography, ranging from one minute to three minutes in length.

Outside of our December show, we had a number of corporate holiday gigs. One of our favorites was performing at the Mary Bridge Children’s Festival of Trees hospital fundraiser, where we were honored to perform at an event that raised $2 million dollars in one night.

2020 promises to be a killer year of amazing projects for Sister Kate. We’re kicking it off in January with another sold out SKDC Boot Camp. And instead of presenting one annual large-format cabaret, we’re doubling down and presenting TWO. We’ll also be dancing one of those in a new-to-us theater space as well.

2020 will be our 14th anniversary, and you can bet there will be a bunch of other surprises along the way. Stay tuned for announcements!